I look forward to Saturdays. My wonderful husband lets me have a couple of hours to myself while he takes care of our children. I used my weekend time to walk to the little creek that we often pass by on our drives around our city. I was intrigued by the little bridge that went over the stream below. I thought it was very pretty especially when it was framed by the foliage of the surrounding trees.  But at this time of year, and because of  the storm of a few days ago, the  leaves are  all but gone.

I was excited to get on the bridge.  But midway through, I felt that familiar spasm that started from my soles and went up to my knees – my fear of heights kicked in.   I remembered those days of my childhood when I had to cross flimsy wood planks to go to the other side of a ravine.    I  was afraid that the bridge would swing and break which was silly of me considering that this bridge was pretty well-constructed.   Yet, I wanted to take pictures, so I had to be a little brave and be in the middle of the bridge for awhile.

It was a narrow stream.  It was about the width of a road lane.  It separated the road from the little park on the other side of the bridge.  I thought that from there, there would be an access to the other parts of the city.   I was wrong.  The park was surrounded by a fence. 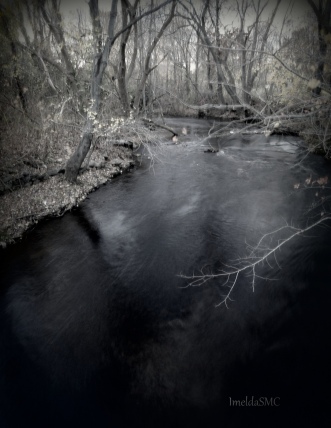 I do not know if it was the light – the  sun was already low at around 4:00 p.m. – but the water was dark.   It did not help that the stream was way below road level and that there were trees on the banks.   As a result, there was hardly any reflection in the water.  That gave me a chance to do something that I have long wanted to try –  long exposure during the day.  The dark water, the  setting sun, and a filter made it possible.

It would have been nice if I was able to go under the bridge  – as some had obviously done – so that I could get a better view.   I did not think that parkgoers were generally allowed to  go beyond the fence though.  Since I did not want to risk a citation from the city, I stayed behind the fences and tried to find a spot where there were not too many trees and branches. 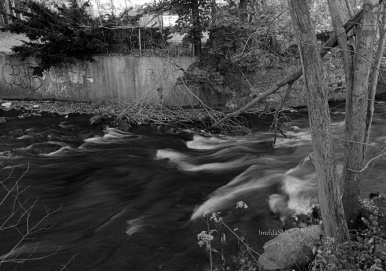 I was having a fun time.  I  tried following the direction of the stream for more photos.   Just when I thought I saw  a nice  open spot, my battery died.  I  pulled out my extra battery from my pocket and replaced the dead one, mentally praising myself for being well prepared.  Alas, the replacement battery was out of charge too.  I took that as my  signal to go home.

I am joining LETSBEWILD’S Weekly Photo Challenge:  Water.   Incidentally, I wish to thank Let’s BE Wild for the honorable mention award for my loving swan photos in this post. 🙂

Join in the fun by submitting your own responses to the theme or just visiting the gorgeous responses in the site.   Thanks you all and have a beautiful Monday.