Once upon an afternoon, in the land of shimmering leaves – 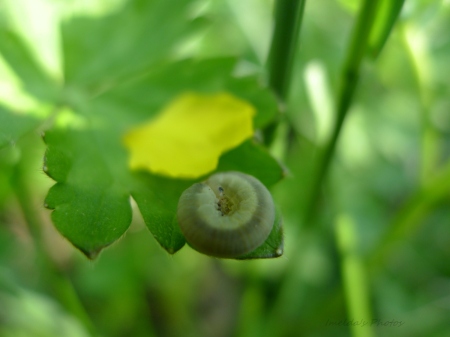 He was in fact dreaming that he was munching his own little bed when suddenly, he heard a voice.

“There’s danger.  You have been found!”

“Hmm-mmmm” was all that Munchy said.  He got too tired munching and crawling earlier in the day.   Besides, he was so little, he was so sure that he could not be found. But then, he felt himself sliding…sliding ..sliding to the very edge of his bed.

He let go of his dream leaf.  He opened his eyes. And saw, to his horror, a big black barrel that was pointed at  him.

As fast as he could, he scurried out of his bed and hopped into the nearest pole to escape!  “ Crawl! Crawl! Crawl as fast as you can!” cheered the voice in his head.

Escape proved to be difficult.  The barrel followed him.  Munchy  thought he’d die from the successive shots that issued from the nasty black thing.

Finally, it stopped shooting at him.  Munchy could not care less where it went or what happened to it.  He was just glad to be alive.

I guess it’s a little too silly.  That’s what happens when I have too much photos and I do not know what to do with them. 🙂